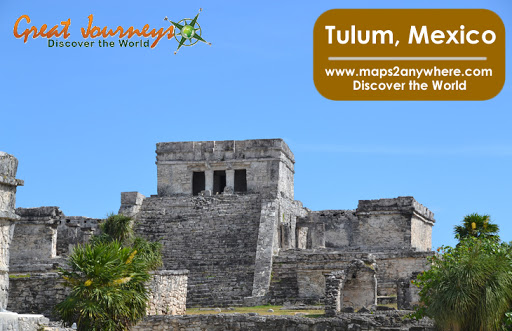 Off To Tulum With A Mexico Road Map

We were bone dry and dusty from working in the scorching desert heat of Hobbs, New Mexico. On a whim, we moved west, found a little security, and dried out. Every night we came home, our hands aching, our lips cracked, and our noses bloodied. One day it was too much, we had not seen water in a year and it was time to go find us the clearest, coolest, cleanest water we could find while on a budget. We tacked a Mexico road map up on a wall, stepped back, and stared. For 6 months we drooled over that map, looked at some Mexico travel videos, dreamed of the sun kissing our skin as the waves gently lapped at our feet. We’d doze off at lunch time under the sparse shade of a yucca and hallucinate about the drunk fishermen who would take us spear fishing, the bottles we’d share with strangers, and the miles crossed by busses, bikes, and on foot that would take us far away from this life and into the next. Six months of planning later, we folded that faded map up, stuffed it into a backpack, and flew it to Mexico where we poured over it every night in our hostel room with a headlamp, plotting our next move as if we were regular Indian Joneses. That map was our daily planner and our bible for our four weeks of adventure on the road.

We flew into Cancun from Houston, TX. Took an ADO bus to Playa del Carmen where we stowed our packs in a dirty hostel dorm room and spent the night eating cheap street tacos and drinking tequila in celebration. After months of selling everything, we owned on Craigslist and in Facebook garage sale groups, giving up what we once thought were comforts, working overtime, and compiling a collection of change in a pickle jar, we were finally here in Mexico. 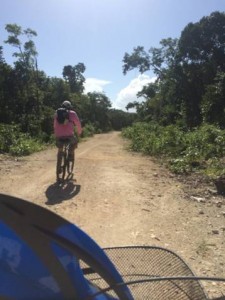 R.L. riding through the jungle & my flippers poking out from my basket

We woke up too excited to be hung over. There was a whole world in front of us and like that, map tacked to our wall, it was just waiting to be  explored. We hopped in a collectivo (a cheaper version of a communal taxi) driven by a lead foot who swerved through traffic as if there was a volcano erupting behind us.

We used our broken Spanish the most while bartering with Taxis and Collectivos. If we hadn’t practiced a few numbers, phrases, and questions before arriving, we probably would have been duped out of a ton of money. Instead, we were able to bargain prices with drivers before we agreed to use their services. If you know some Spanish, you can barter on everything from taxi rides, trinkets, and even tours! Learn before you take off on your own adventure! Check out a full list of Spanish language courses, from beginner to advanced.

Once we arrived in Tulum, we rented a couple of bikes and searched for a camping spot. One hippie nude beach and an overpriced margarita later, we found Max’s campgrounds. Max, who didn’t speak a lick of English, charged us $7USD/night to set up our tiny two person tent not five steps from the beach. We stowed our packs, quickly set up our tent and rushed to the grocery store for a case of Sol’s and some limes.

We spent the night cooking, eating and drinking with the other campers and backpackers, wading into the water and watching the stars. 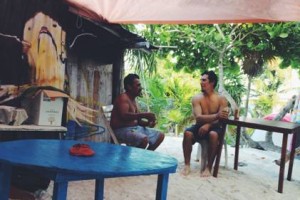 Max (left) and R.L. (right) drinking a beer and talking

We fell asleep around 9:00pm and woke violently to the sound of thunder and Max frantically shouting our names. We were the only tent that didn’t have a tarp above us and it was pouring rain. Our things would be ruined if we didn’t get under out neighbors tarp, and fast! In the haze of travel, tasty beer, and blindness (I didn’t have my contacts in) I bolted from the tent, confused of where I was in the darkness. In all the chaos R.L. woke and shouted over the noise for me to help move the tent while the rain came down in torrential sheets. Once we were safely out of the downpour, we collapsed back in the tent, our arms and legs sugar coated in sand, sticky with humidity and sweat. We listened to the rain and burst into laughter at the ridiculousness of it all. We were already onto something good.

We slept until the rain subsided and then woke abruptly to, how do I say this delicately…Montezuma’s Revenge. We spent the morning crawling back and forth to the toilets which consisted of PVC piping and shoddy plumbing. Attempting to smile at each other in between the anguish. It’s true what they say, don’t drink the water unless it’s bottled, what we overlooked was the ice.

Considering we were exhausted and grossly dehydrated, we decided to check into the Tulum Bike Hostel just down the road. For $40USD/night it included a cozy private bedroom and bathroom, two bike rentals, and a hearty breakfast every morning. From there we spent the rest of our third day sleeping it off in hammocks, eating at the restaurant next door, and generally taking it easy. 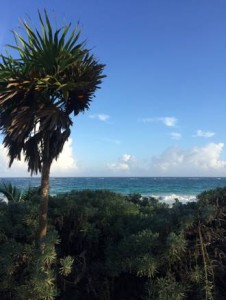 The View From Our Tent

The following week we explored the town of Tulum and its outlying areas; most notably the Cenotes. Cenotes as essentially sink holes in the lime stone consisting of half spring water, half salt water, making for a cool clear elixir of pure enjoyment. We were told that the Mayan people used to venture into Cenotes to recharge their “Carocal,” in essence their energy or batteries. Whether or not that’s true, we both agreed that when we jumped in to any Cenote, we immediately felt a surge of energy. The first Cenote we visited was Tortuga where we saw sea turtles and jumped from the cliff pictured below.

We went to a ton of different Cenotes, but my favorite was Dos Ojos. Inside this crystal clear swimming hole we wove through a maze of stalactites with scuba divers blowing bubbles beneath us and bats flying above us. Sometimes the space was so small you were sure you’d bump your head against a stalactite, other times the cave was so massive, you felt insignificant in comparison. 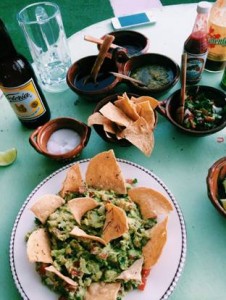 The most amazing guac on earth

One day we went to the ruins of Coba, one of the last Mayan ruins you can hike up. We climbed on all fours like monkeys up the 120 steps to the top where we huffed and puffed while we took in the incredible view.

We also wandered around the Tulum ruins where they say was once the center of trade and commerce. These ruins were incredible, absolutely massive and the view from the top has a profound effect on the soul.

Pictures really do no justice to the majesty of Mayan ruins. The videos found in this LINK round out a better picture of what visiting these magnificent structures looks like. Take a gander and see for yourself the amazing architecture and rich cultural history Mayan ruins have to offer.

Before we started this trip, we told ourselves we’d swim with sea turtles and learn as much as we could about them. We were fortunate enough to bump into a goofy guy by the name of Fernando while on a collectivo. He had just finished a shift at one of the resorts and was wearing the matching crisp attire. He had his flippers and snorkel with him and we asked where he was headed to. He said, “I get to go swim with the sea turtles today! Hehe!” His giggle made the entire van swoon with laughter. With our permanent

smiles, we asked where the turtles were and he told us, “Akumal!” Akumal has a concentration of sea grass which in effect causes sea turtles to flock there and they even lay their eggs there. The whole operation is very legitimate, focused primarily around protected areas, respecting the turtles distance and not chasing them. As we swam with these gentle beings, I felt a weird calm overtake me. The subtle bobbing of a wave passing overhead, the faint laughter of children on the shore, and R.L. next to me with wide eyes. The turtles gazed at us, their eyes heavy, regard us momentarily and then move along. They possessed the tranquility of a monk in meditation and for this I loved them. 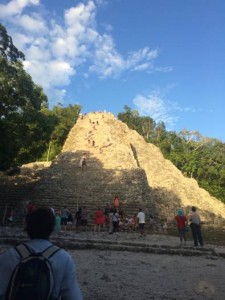 At the base of the largest structure at Coba.

In Tulum, we’d lock our bikes to a palm tree and walk in the waves. The sand tinted pink from the coral reef just off the shore, the water lapping at our feet pristine and romantic.

Tulum is a place unlike any other, in a class of its own beauty and prestige. I hope that someday you will have a chance to go there.  The food was outstanding and fresh, the people were welcoming, and the sights were unforgettable.

All in all we stayed for a week in Tulum followed by three weeks in Belize. All because of the Mexico road map that we bought from www.maps2anywhere.com. Start your adventure the same way we did by clicking this LINK and take the first step in the beginning of an adventure of a life time. 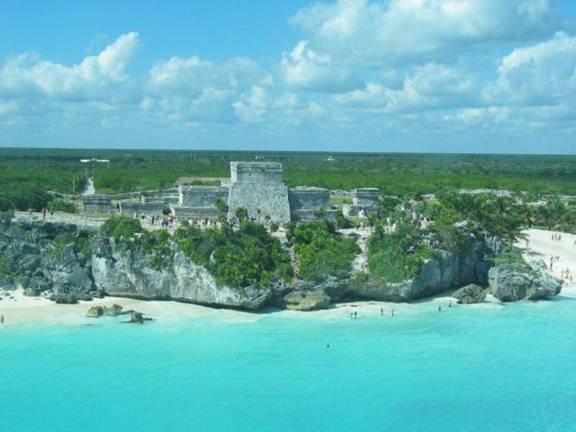 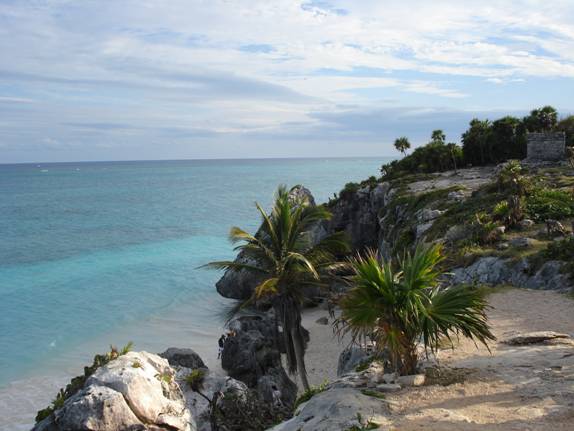